Last week my family and I watched a movie called Circle.  It was a thought provoking movie where Mae Holland (played by Emma Watson from the Harry Potter series) got her dream job with the world’s most powerful tech and social media company.  Encouraged by the company’s founder (played by Tom Hanks) to participate in a ground breaking social experiment. She became “totally transparent” where she was on live web feed during her daily life. It showed the world with real time feedback from her “followers” of her daily interactions under the premise that a person inherently behaves better for themselves and with others within society if they know someone is watching. I totally recommend watching this as she took the social experiment and ran with it, and in my opinion, we could do with some of this transparency in Washington and in the world in general. (I am sure several would agree!) I won’t spoil the movie any further than that. But I liked it alot even though the rotten tomatoes rating wasn’t great.

I know that to some reading this, I may have just described an anxiety trigger for you.  I apologize if this is the reaction you had.  I know that a lot of people are very anti- “big brother” and they are entitled to their reasons and opinions, but please stick with me a bit longer.  Everyone is wired differently and have different life experiences that shape them into the people they are.  Some people self-reflect and know their behavior patterns and some people are oblivious to how they act toward themselves and with others. I fall more in the first group. 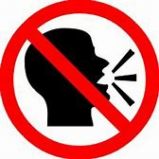 Now, that is not to say that I haven’t had to eat my fair share of crow in my lifetime.
There have been times that I spoke before I engaged the brain into gear. I can’t tell you the number of times that I was berated as a child to think before I spoke. Or the times that I was told that I should not speak unless spoken to.

After much reflecting on my life (as one my age tends to do from time to time) I have noted that I generally fall into the category that I prefer to live my life out loud.  After all, if something I do, either for someone or to someone or visa versa, and if someone could benefit from my example, so be it! I have always been a “helper” in this sense. Even when there are tasks on the hubby’s “honey do” list, I generally will help if I am able, that way this will make the task/job go by faster, so we can move on to a more fun thing to do. I think that this quality about me is what set me apart and was a quality that some of my fellow Yoga Teacher Trainees told me after graduation that they wish they could do.  They told me that I was not afraid to just come right out with – whatever.  They told me that they could never be like that.  My question to them, why not?    If I can help you, we can all benefit in the long run.  Right?

I would like to do an experiment of my own and try some of what Mae Holland did in the movie. I won’t record all the time, but I will post brief recorded bits here, and on my Instagram account, Facebook page and Twitter account of my daily practice, whether it be yoga, meditation or on the subject of meditation or perhaps some of me thinking out loud about day to day topics as they relate to yoga, body positivity, workplace wellness, etc.   I will probably mix it up and put a little here, a little there just to keep you on your toes.

My reason for doing this is  to help offset some of mainstream media & the internet’s tidal waves full of images of thin, hyper-flexible yogis that tend to intimidate a lot of people. I understand that is a source of inspiration for some, but that tends to have the opposite effect to those persons who would like to try yoga. They talk themselves out of trying yoga before they even get on a mat because they think their bodies could never attain what the image projects to the viewer.  SO, I am here to do my part in breaking the cycle.  Yoga is for EVERYONE!

I am really inspired to step outside my comfort zone for the greater good of the evolution of our Yoga community thanks to trailblazers Anna Guest-Jelley, Dianne Bondy, Amber Karnes, Melanie Klein and many others-

I have broken out my inner Warrior! 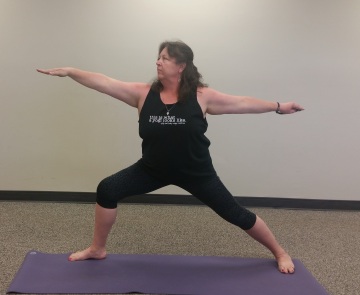 After discovering Yoga later in life through the workplace as a stress reducer, I was inspired to seek out a program to deepen my own personal yoga practice as well as learning how to help others like myself reclaim some peace of mind and reclaim body flexibility. I am a registered Yoga Teacher through Yoga Alliance. Graduating the Spring of 2014 from the YTT program at the Glowing Body Yoga Studio in Knoxville, TN that was primarily an alignment based curriculum as the program was under the direction of B.K.S. Iyengar certified teacher Cindy Dollar of One Center Yoga in Asheville, NC who brought in other Iyengar taught teachers, Gabriel Halpern and Pranayama specialist, Richard Rosen. I have also studied with the body positive trailblazer and creator of Curvy Yoga, Anna Guest-Jelley and have added certified Curvy yoga teacher to my teacher toolbox. Not long after that, I found Dianne Bondy of Yogasteya and Amber Karnes of Body Positive Yoga and studied their program, Yoga for All and have added Yoga for All certification to my accreditations. I am a huge cheerleader for the Accessible Yoga movement and Yoga and Body Image Coalition and I try to embody the values and provide safe, judgement free space for people to playfully explore and reconnect with our bodies and souls. Whether you are a beginner to Yoga or have been a few times but quit for whatever reason or perhaps you felt out of place in a normal studio environment, I offer yoga sessions so that others like myself can experience the reclaiming of their bodies much like I have and experience the freedom that a solid yoga practice can bring along with the stillness of the mind and the restoration of your spirit. I recognize that those “persons of size” need a more gentle approach (because, let's face it, been there, done that!) and time to get from pose to pose. I help guide you to fit the poses to your body and not your body to the poses. View more posts